The new cycle of war in the eyes of a steel colored researcher: not cycle, but the war of ideas

Lead: article take you through the new cycle of war!

recently, the “new cycle” topic is quite hot.
The root cause of this topic is that the rise since March 2016, the domestic economy continued to perform better than the mainstream market expectations.
Especially in the iron and steel coal as traditional economic sector representatives from industry back into profits before dying.
Confined to policy stimulus and inventory cycle seems to be short on this round of economic upturn can not give a convincing explanation.
Seek explanation has become the natural choice from a long period of longer dimension.

Opponents argued that the incremental demand can not see the long-term from long-term demographic perspective, demand may even fall, and production capacity to supply-side reforms should also not allow a large number of
new capacity.

Supporters argue that the traditional sectors of the economy experienced a market-clearing, improve industry concentration, with the conditions of new capacity open cycle.

Opponents argued that the current round of price spikes caused by product cycle PPI inflation has not spread to the CPI, in the upstream sector of the economy (high proportion of state-owned enterprises) in extrusion downstream sectors of the economy (high proportion of private enterprises
), and the price has jumped behind the visible hand of administrative limit production.
In general, private enterprises more efficient than state-owned enterprises, which will only lead to further deterioration of the economic structure, damage prospects for economic growth, so what is new cycle.

In this regard, the author as a researcher in the iron and steel colored phenomena, supporters prefer the “new cycle”.

iron and steel industry, for example, supply-side reforms formally proposed at the end of 2015, but to fall in capacity policy after April 2016.
Prior to this, the steel industry has undergone a unilateral decline for five years.
Representative rebar monthly average price fell from February 2011 is 4888 yuan / ton in December 2015 to 1755 yuan / ton.

From the chain perspective:

2014 throughout the steel industry chain most strong prices for iron ore prices plummeted, a large number of ore trading business out of the market;

2015 years, especially in the second half than 6,000
million tons of steel production capacity in the initiative to shut down out of the market;

five-year period,
each chain link broke out risk events, we can say the whole industry chain to achieve a clearing in many ways. 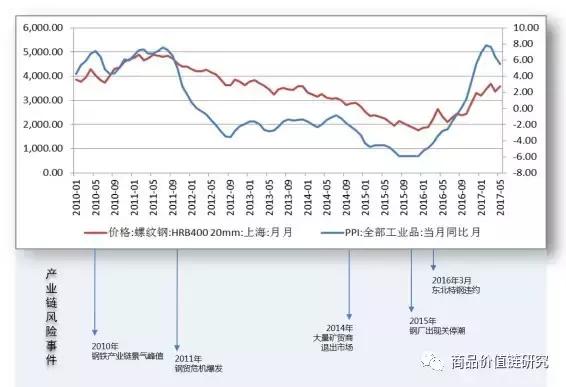 chain
clearing may also be lower than expected from the feed end discerned resumption of production after the current round of price and improved profitability.
About resumption of production lower than expected current controversy great market that administrative limit production is the main reason often to excess capacity should be used to analyze the model of perfect competition, ie if there is no administrative limit production, supply these industries should appear after earnings are highly
flexible.
This argument is certainly justified, but it too is something from the physical capacity.
Physical capacity to form an effective production capacity release must be workers, capital and management; and the already huge gap between the physical capacity out of the market and can exist in these three areas (workers, capital and management) in production capacity.

On the other hand, although the exit capacity return to the market, but because the workers, capital and management and other reasons, the overall return is not large scale.
Back to reality, and then to iron and steel, for example, in addition to cleaning up this rigid policy “to be steel”, the environmental protection is only limited production stage has increased the threshold for the return of exit capacity, does not prohibit exit capacity back into the market.
And immediate and profits compared to raise the threshold limit production environment really hardly anything.

But from 2011 to 2015, far more than unilateral decline in the steel industry, but also from a global perspective, commodities five years struggling.
If we allow the market clearing depth, still in the just against the Chinese financial system can withstand it?
Looking back now, the reason why the supply-side reforms proposed in late 2015, a core demand is that to avoid the traditional sectors of the economy to adjust the depth of the impact of the financial system.

From the above phenomenon, the mainstream market has continued to underestimate the economic performance and the “new period” not optimistic about the lack of knowledge can be summarized in four aspects:

1.
not fully aware of 2011 to 2015, traditional industry has experienced a market adjustment of up to five years to achieve a partial clearing.

2. Too much from the physical capacity that matter, ignore the next five-year downward adjustment of the gap has been widening between production capacity and exit capacity, effective capacity supply
elastic is not large.

3. Neglect this cycle rally is a major feature is the beginning of a rebound from the bottom of a large commodity prices, changes in the rebound at the bottom of power, and nominal income potential structural effects not
It is fully recognized.
With rebar, for example, less than 1,700 yuan price is not only the bottom of the cycle, but also the probability of large bottom long period.
2000 steel and 3000 steel for steel enterprises is very different business environment.

4. Rely too much on the market clearing is the only form of clearing, the possible role of lack of supply side reforms in the economic clearing of understanding.
Just a whole against the face of the financial system, so that the depth of the real sector of the market-clearing neither achieved nor fair.

Thus, from the conventional production cycle perspective sector, more stock of replacement of existing capacity and structural alternatives, such as steel in an electric furnace to replace the blast furnace.
Domestic traditional sectors of the economy have to really want to enter a new cycle of the main sustenance but also whether urbanization and industrialization, and Western economies in Asia, Africa will make up a large-scale infrastructure debt.
After all these years, China has re-established a global benchmark hardware infrastructure.

However, it is very regrettable that the current round of “new cycle” of the dispute, other than Chinese economic analysis is not deep, or in the traditional United States and Europe as well as export-oriented analysis on the domestic economy
mainly driven hard to see systematic analysis of the domestic economy and long-term impact of external economic.

round of “new cycle” of the dispute there is a big regret is that too many opponents to take the needs that matter.
How Ten years ago, we can predict that there will be demand for smart phones today do?
We can predict the status of China’s electronics industry chain in the world to reach the height of today do?
The rise of new economic sectors wish a little more patience, walking to see.

Finally, as a colored steel analyst replied there is no “new cycle” is clearly beyond my ability.
But I think the current round of sustained-than-expected economic rebound at least remind us that in the analysis of problems do not always have the “short-cycle needs analysis”, “long-term decline in economic growth”, “economic leverage by maintaining stability”, “clearing only
be able to rely on the market “,” traditional sectors of the economy can not “hold these analytical frameworks and concepts, but should follow the evolution of the economy some more new knowledge.